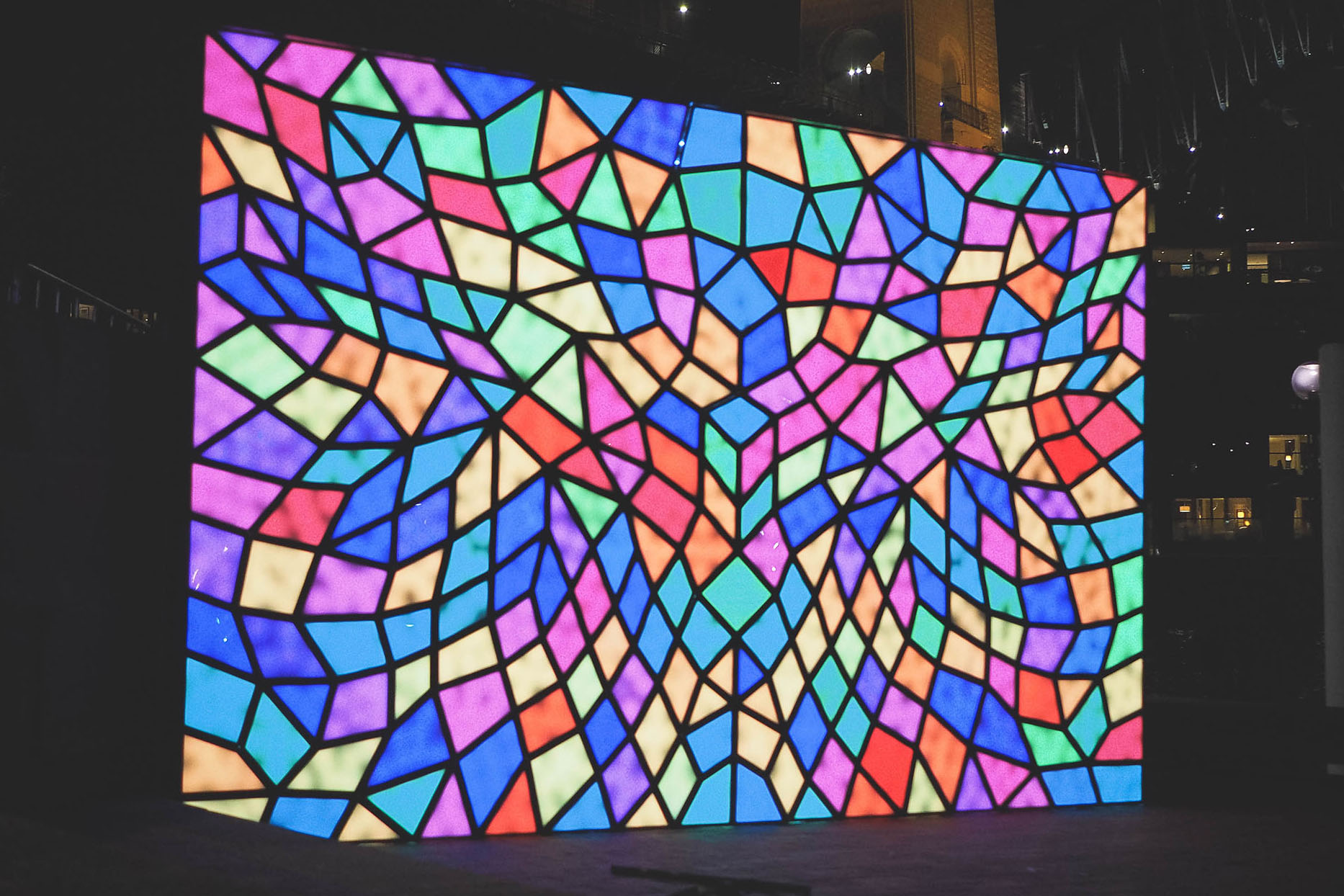 CREATE Project Illuminate is now rebranded as UNSW Illuminate and operating as a student project under UNSW Engineering ChallENG program, while the project will still remains in close collaboration with CREATE

The artwork, its function and meaning

Crystallise is a lighted mural comprising of multi-coloured triangular and quadrilateral forms. The installation appears to as a mosaic, but encourages viewers to come close through displaying randomly generated colours and patterns. As they come into close proximity with the mural, sections of the canvas fade, leaving behind only a pair of wings.

What is the design inspiration of your work? Does it have any special meaning to you?

Our main inspiration is Colette Miller’s angel wings murals, which were exhibited as street art in Sydney (Australia), Los Angeles (United States), Juarez (Mexico), Nairobi (Kenya) and many other locations. To Miller, the wings “represent our inner angel” and remind individuals of the pure and good part of the human condition that emerges even as individuals experience trauma and guilt in their lives. The wings’ embodiment of the human spirit challenges individuals to consider their choices as humanity and work towards a greater good.

We extend Miller’s artwork to different spectrums of humanity, and the idea that everyone has secrets or hidden truths. By having different lighting patterns on the artwork and hiding the pair of wings until observers come in close proximity, the installation allows people to fulfil their desire to find truths within themselves and recognise and cherish their differences.

Why did you create this work?

It is a good opportunity to get UNSW students involved in a large-scale project and develop practical and interpersonal skills.

History of the club and our involvement

Who are you? What is CREATE?

CREATE is a student-run club at the University of NSW that runs and supports practical projects for students to learn skills in engineering, invention, design and collaborate on those projects. We run and provide workshops for beginners on electronics, programming, soldering, prototyping and 3D modelling, and selling electronic components on campus.

Most of our members are engineering, built environment and art and design students from a wide range of disciplines, including mechanical, mechatronic, electrical, civil engineering, computer science, architecture, industrial design and fine arts. However, the club is open to students from all faculties and our workshops also cater to members of the wider community.

How long has CREATE been involved in Vivid Sydney?

CREATE as a student group were involved in various Vivid programs in the past – in 2014 and 2015 we presented at Vivid Ideas functions, from talking about the use of drones to presenting an interactive Pacman installation.

Our first official appearance in the Vivid Light Walk program was in 2016, when we presented the Mondrian Cube at Circular Quay. Mondrian Cube was inspired by the works of the 20th century Dutch artist, Piet Mondrian.

Crystallise marks our fourth year of involvement, and the third year we presented to the festival with a project.

When did you form this team?

The current incarnation of our team formed in August 2016, and consists of mostly new club members with a few experienced senior leads. Every year around the month of August, CREATE does a call out for new and old members to form a new team and come up with a design/idea for an upcoming installation.

Describe how your team works. How many people are involved, and who is in charge?

There are around 18 people on the team. Our 2017 leader is Yunzhen Zhang, a final year electrical engineering student. The project team has three subgroups responsible for structural design, electrical design and software programming. Construction is a whole team effort mostly led by the structural design team. Team members are free to transfer between or help other groups depending on their expertise and prior experience.

How long did it take to complete the project?

Nine months, from concept development in mid-September 2016 to final implementation in the present.

What is the general process involved in creating the piece?

We initially spent the first three months from August to October 2016 selecting a main idea and drafting a submission to Destination NSW, while designing the basic structure, additional features and electronics. Our submission occurred in September and October and required us to submit an initial concept, then attend an interview with curators. Following our acceptance, we developed a prototype during the summer break (December 2016 – February 2017) to gain experience on how to best build the main artwork later.

Throughout the first three weeks of March, we began using CAD and parametric design to generate models and designs of the final construction and organisation of required materials to construct the project before spending the remaining time constructing the design and solving any problems missed in the design stage.

What types of technology have you harnessed to create the piece?

Crystallise is mostly constructed using lightweight materials such as plywood and corflute. It uses waterproof LED modules and power supplies that are of electronic billboard standards. A small microcontroller is used to control the lights.

What problems did you experience while completing this work? How did you overcome these difficulties?

Most of our difficulties came from the logistics of getting people together to manufacture the project, as all of us had different schedules and assignments to complete. Fortunately, we did not have any trouble with the electronic components this year, but with such tight schedules much work had to be completed at the last minute.

Fixing these problems involved a lot of improvisation and perseverance. As we were short of time and could not fix errors systematically, we had to think on our feet to successfully resolve any problems where supervisors of construction and sub-leaders had to come up with alternative designs as we went.

How is your project facilitated?

Funding is mostly provided by event organisers and sponsors. CREATE also conducts their own fundraising through electronic component sales. UNSW faculties help facilitate the project via financial sponsorship and access to workspaces.

Otherwise, the project is almost entirely student-run. The project leader is responsible for organising work and consulting with club executives.

What element of your work do you think attracts people the most?

The different patterns programmed into the installation that alludes to and enhances the impact of the original artwork, and the hidden nature of the wings that encourages people to come close and find out for themselves.

How do you feel about the final artwork? Does it fulfil your original vision?

We feel relieved that all our hard work has paid off in meeting the deadline while balancing our work with assignments and other projects. Despite having to modify technical details of the artwork to accommodate unforeseen design problems, the basic idea is essentially intact. Crystallise is ultimately a worthwhile effort so long as people enjoy interacting with the artwork and we enrich ourselves resolving our difficulties and working as a team.

Will you be returning to Vivid next year? What are your next steps?

Absolutely! Through the upcoming months, we will be looking for inspiration on the next concept to design and build, while also recruiting and passing on the skills that we have learnt to the next years team through workshops run by the club.

What are the future plans for the current installation?

We are currently working on further improvements to the artwork by adding in more patterns and fun easter eggs for people to find. After the event, there are plans for the installation to be transferred to the UNSW Faculty of Engineering for exhibition.